We do our best to make our garden as nice a place as possible for garden birds. Their colour and character add so much to our surroundings here at Moy River.

We had a service man call to us on some business a few years ago and before he left told us very excitedly about ‘an unusual bird’ he had just seen outside. He described the bird enough for us to be able to tell him it was a Goldfinch. While the Goldfinch is not unusual, it is indeed very colourful. 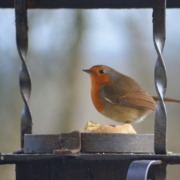 Golfinches are great; if you get one, you get a few as they travel in flocks. They deserted us for a year or two however but we later found out there was a few reasons for this. The very cold winters of 2009 and 2010 was severs on all garden birds and that was a reason but another reason was that these lads are fussy enough about what they eat. In an effort to attract the Goldfinches back we researched what they like best and we discovered it was… nyjer seed. Nyjer seed resembles small grains of wild rice and is highly desirable by many finches for its high fat and protein content. Nyjer has another name, thistle, which sometimes alarms people. Many people think they will be growing thistle weeds in their garden if they offer this seed. On the contrary, nyjer is not a thistle at all. It’s the seed of the nyjer plant native to Ethiopia. You will have gathered that the Goldfinch is our favourite but every garden bird has something unique to offer. The robin is special and loves nothing more that a simple baked potato. Mind you he hates sharing and despite his sacred reputation, he has a temper like a Philistine! The Siskin is selfish and will beat off all-comers from the peanut feeder. The Blue Tit is shy while the Coal Tit is clever beyond imagination and the Great Tit is… well just great! Chaffinches tend to stay on the ground and are happy with the crumbs from the table above. We have Wrens and Tree Creepers as well but they tend to be the minimalists in the world of garden birds; they live on little and don’t give away many secrets! 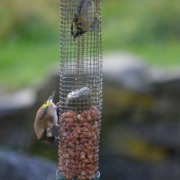 Coal Tit taking the shortest route to the food!

Our grounds are geared for wildlife in general and birds in particular. We leave wild areas for natural food sources and safety in summer and we hang a few nest boxes so that we can enjoy the goings on in spring. We avoid cats! The average cat kills 300 garden birds each year and as we all know, there is no such thing as an ‘average’ cat!

Rather selfishly, we have placed our two bird tables close enough for us to enjoy from inside the house. One is outside the kitchen window while our guests get to enjoy the one we located just outside the dining room.