We are located at the headwaters of the river Moy in Cloonacool. Every stream that runs by our door is a small tributary to the river which eventually reaches the sea near Ballina in County Mayo. Any day you can spend a few minutes along the streams or the river itself, you will see lots of wildlife, especially birds. The following colourful characters are usually on display.

Dipper A short-tailed, plump bird with a low, whirring flight. When perched on a rock it habitually bobs up and down and frequently cocks its tail. Its white throat and breast contrasts with its dark body plumage. It is remarkable in its method of walking into and under water in search of food. Shown above. 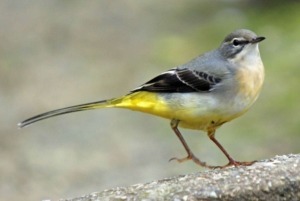 Grey Wagtail The grey wagtail is more colourful than its name suggests with slate grey upper parts and distinctive lemon yellow under-tail. Its tail is noticeably longer than those of pied and yellow wagtails. They have gradually increased their range in the past 150 years and in the UK have expanded into the English lowlands from the northern and western uplands. orange birds of slow moving or still water. They fly rapidly, low over water, and hunt fish from riverside perches, occasionally hovering above the water’s surface.
They are a vulnerable to hard winters and habitat degradation through pollution or unsympathetic management of watercourses. Kingfishers are amber listed because of their unfavourable conservation status in Europe. Moorhen (known locally as Waterhen) Moorhens are blackish with a red and yellow beak and long, green legs. Seen closer-up, they have a dark brown back and wings and a more bluish-black belly, with white stripes on the flanks.

Ref: The Royal Society for the Protection of Birds (RSPB)

Our Garden Birds
Scroll to top